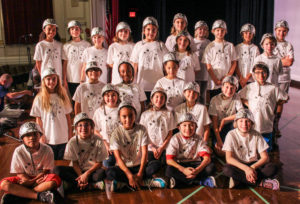 Fourth and fifth grade students at Washington Irving School had a blast performing the musical “Blast Off” tonight. The story is set in the year 2199, and tells the tale of astronauts investigating a newly discovered planet called Aires. Due to the effects of global warming, researchers from Earth are looking for other possible solutions for advanced life on Aires. The mission includes defying gravity, and proves to be lots of fun until a meteor shower strikes and damages the ship. The team feels utterly hopeless until they encounter a friendly clan of aliens who save the day!

Kids’ Club is proud to have helped fund this terrific “STEAM” show presented by Family YMCA at Tarrytown’s Y Theatre Program. We love that it not only developed the children’s theatrical and musical skills, but also taught the actors and audience about the scientific concepts of space, climate and physics. Great job, everyone!

Stay Up To Date On The Latest News